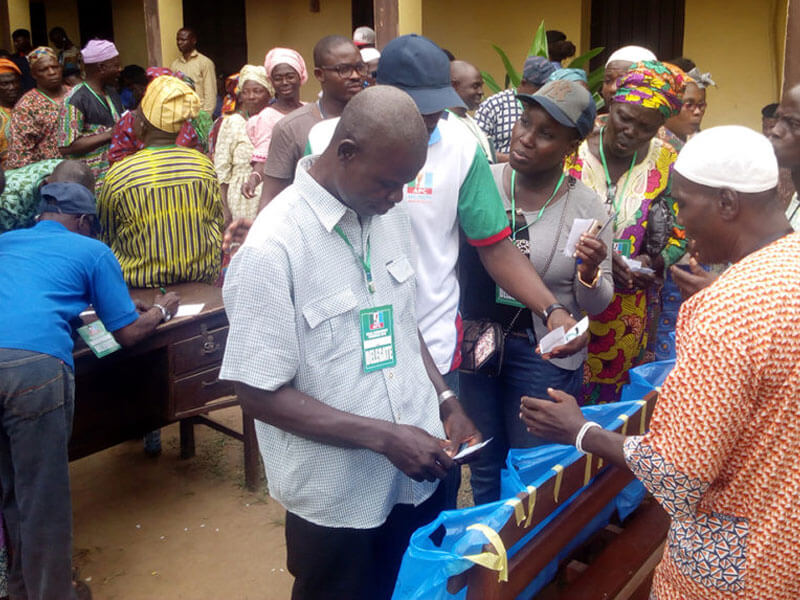 The ruling All Progressives Congress held local government congresses across the county saturday amid rancour in many of the party’s state chapters that resulted in violent incidents and at least one death. The congresses, which were held to elect officials that would run the affairs of APC at the local government level, also witnessed parallel exercises in some states.1 Killed in Lagos, As APC Holds Bitter LG Congresses

That was as Oyo and Kaduna states went to the polls yesterday to elect officers at the third tier of government. While the council poll in Kaduna was keenly contested under a largely peaceful atmosphere, the one in Oyo recorded incidents of violent attacks that left one teenager dead. The victim was killed by stray bullet as security agents were trying to quell a developing violence.

Multiple eye witnesses identified the man killed during the local government congresses in Lagos State as Nurudeen Olanose. He was, allegedly, shot and killed at Central School, Dopemu, in Agege Local Government Area, during a fracas that broke out between rival factions of APC. Trouble started after the Speaker of Lagos State House of Assembly, Hon. Mudashiru Obasa, arrived at the centre to participate in the congress, and things degenerated into the firing of gunshots, according to witnesses.

Some accounts said a second person, Kadiri Garba, died during the fracas, while nine suspects were arrested by the police and the congress was cancelled.

A middle-age man dressed in red and white traditional outfit, with his face turned upwards, who was believed to be killed during the congress, was seen on the ground in a viral video. While some claimed he was killed by a stray bullet, others said the police had a hand in the shooting.

When contacted, the state Police Public Relations Officer, Chike Oti, a Superintendent of Police, debunked claims of any police involvement in the death. Oti said the election took place at Central Primary School, Oniwaya, while the murder scene was far away.

“Notwithstanding, we swung into action when the news filtered in and arrested the murder suspects; all three of them. Already, the corpse has been deposited at the morgue for autopsy to fulfil the coroner’s request.

“From what was gathered, his death might not be unconnected with street rivalry. The suspects have been transferred to the State Criminal Investigation and Intelligence Department, Panti, Yaba, for further investigations. The investigators will reveal why he was killed and the law will run its course. But note that the police had nothing to do with the death.”

THISDAY gathered that APC in Agege is factionalised between supporters of the party leader in the council area, Professor Tunde Samuel, and supporters of Obasa.

The congress did not hold in Kosofe Local Government Area, Agboyi-Ketu Local Council Development Area, and Ikosi-Isheri LCDA due to differences among party leaders in the areas. Likewise, the ward congresses held penultimate Saturday could not hold at 14 wards that make up both Kosofe Local Government Area and Agboyi-Ketu LCDA, though Ikosi-Isheri LCDA was able to hold its ward congress.

But the local government congress passed peacefully in Bayelsa State, with the APC leader in the state and former governor, Chief Timipre Sylva, hailing the process as the best the state has seen in recent times. “APC members in Bayelsa State, you have really been very exemplary, not only in Bayelsa, but in relation to the rest of Nigeria. I believe that no other state has conducted congresses more peacefully than Bayelsa,” Sylva said. Though, there were reports of a different exercise organised by a former acting governor, Nestor Binabo.

The congress was also peaceful in Delta State, as no incident was reported in the 25 local government areas of the state. But in Bauchi State, there were protests in some local government areas, particularly Bogoro and Tafawa Balewa, as APC members dissented alleged attempts to manipulate the voting process.

Kano State had a peaceful congress, and a massive turnout of APC members. The state governor, Dr Abdullahi Ganduje, praised the congress in the state after casting his vote at his Dawakin Tofa Local Government Area party secretariat. “I am sure that those who would be elected today would be competent people, with integrity and capacity to take the party to victory in all the forthcoming general elections in the state, and the country in general,” Ganduje said.

However, it was observed that Senator Rabiu Kwankwaso’s group, Kwankwasiyya, might have boycotted the congress.

In the areas monitored by THISDAY, there was a large turnout of APC faithful loyal to Minister of Transportation and leader of the party in the state, Chibuike Amaechi. But supporters of a governorship aspirant on the platform of the party, Senator Magnus Abe, boycotted the exercise.

The congresses in Adamawa State witnessed parallel exercises by factions loyal to former Governor Murtala Nyako and incumbent Governor Jibrilla Bindow. The development was informed by penultimate Saturday’s ward congresses where some aggrieved members of the party loyal to Nyako felt short-changed and did 10 petitions to the party’s appeal panel. The appeal panel headed by Senator Nurudeen Usman dismissed eight of the petitions for lack of merit and upheld two. The aggrieved members, who felt their grouses were not properly addressed, united under a faction loyal to Nyako and held their own congresses across the 21 local government areas of the state.

There were also parallel congresses in Edo State and incidents of violence. Sporadic gunshots marred the exercise in Afuze, headquarters of Owan East Local Government Area. Speaking on the situation, Deputy Whip of the House of Representatives and member representing Owan Federal Constituency, Mr. Pally Iriase, said harmonisation and consensus was adopted during the ward congresses and it was expected that the same pattern will be used in the local government congress, “but some people still want impunity to continue, which Comrade Adams Oshiomhole preached against during his declaration for the national chairmanship of the party.”

At Owan West, there were parallel congresses by the Professor Julius Ihonvbere and Ojo Asein, who is a member of the state Assembly.

In Ogun State, hoodlums disrupted the congresses in many areas, while in Anambra State, the exercise passed peacefully, as the congresses were held by affirmation. In some local government areas, members of the party told journalists that they simply returned the previous officials, and were waiting for the congress committee to ratify their positions.

In Imo State, the local government congress was postponed to Monday following the arson attack at state party secretariat on May 11.

The congress in Kwara State was without incident. Chairman of the congress committee for Kwara State, Senator Mohammed Ohiare, expressed satisfaction with the exercise, saying, “We are happy that hierarchy of leadership under the able leadership of Senator Bukola Saraki has really made a lot of landmark in the state.”

In Benue State, there was disagreement, as some members of APC wanted the return of all ward, local government, and state executives for the sake of peace and continuity, while others favoured an elective congress. The continuity group, said to be led by a former governor of the state, Senator George Akume, was believed to be following the position of the North-central chapter of the party, which ran contrary to the national leadership’s support for elective congress. In the end, there was an affirmation of the former executives.

In Ebonyi State, the congress passed without incident, though the APC governorship candidate in the 2015 general election, Senator Julius Ucha, had many of his nominees elected, while a segment of the party loyal to the Minister of Science and Technology, Dr. Ogbonnaya Onu, was alleged to have boycotted the congress. Ucha’ s faction, led by Ben Nwobasi, alleged that Onu’s faction, led by Eze Nwachukwu, boycotted the congress as they were not seen at the council venues chosen for the election.

Enugu State witnessed parallel APC local government congresses, just like during the ward congresses, as factions loyal to the Minister of Foreign Affairs, Mr. Geoffrey Onyeama, and Director General of the Voice of Nigeria, Osita Okechukwu, elected separate officers and delegates at different venues. While Onyeama’s group held their congress at Comprehensive High School, Udi/Abia, the faction loyal to Okechukwu held theirs at the party office along Aboh road, 9th Mile.

The congresses in Sokoto State were held mainly through consensus, while Niger State witnessed protests in many areas, as APC members resisted alleged attempts to hijack the voting process.

Ondo State had a peaceful congress, though there were reports that parallel congresses were held in some local governments.

In Kaduna, the contest was keen and largely peaceful across the state. Electronic Voting Machines were used for the Kaduna election, for the first time in Nigeria. Though, cases of late arrival of voting materials and malfunctioning of the EVMs were reported.

Voting was scheduled to start at 8am and end at 40pm, but in many of the polling units visited by THISDAY in Chikun, Kaduna South, and Kaduna North local government areas, the electoral officials arrived with voting materials from about 9:30am. In some areas, election materials were yet to arrive by 1:30pm.

The council poll in Oyo State was marred by low turnout of voters. The exercise was largely peaceful until news broke that a teenage girl, simply identified as Kofo, was allegedly killed by a stray bullet from an officer of the Oyo State command of the Nigerian Security and Civil Defence Corps in Ibadan. According to a source, the girl had been sent to buy drugs at a pharmaceutical store when she was hit by a bullet.

Officials of NSCDC were said to have been invited to quell a fight among areas boys in the area.

Another account said the girl was accidentally shot when the officers were trying to scare away hoodlums at the polling unit.

Following the girl’s death, hoodlums attacked the NSCDC divisional office in Ibadan North West local government council at Ekotedo, vandalising the premises. It was gathered that officers of the NSCDC later mobilised and repelled the attack.

Spokesman of NSCDC in the state, Olusegun Oluwole, confirmed the incident, but said men of the command were not responsible for the killing of the teenager. Oluwole said the hoodlums were already shooting before the arrival of the NSCDC team. “Our men are not responsible for what happened, but I can tell you now that the case is with the police,” he was reported to have said.