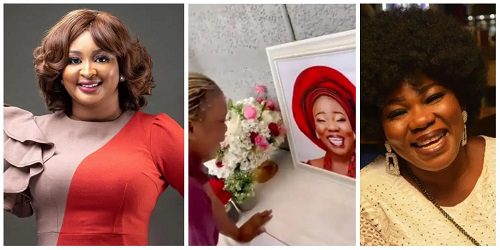 Nollywood actress Etinosa Idemudia has questioned some of her colleagues accusing them of chasing clout with late Ada Ameh’s death.

Her reaction comes after some celebrities recorded themselves paying Empress Njamah, who is the late actress’ friend a condolence visit.

Njamah had shared a heartbreaking video crying uncontrollable and later, comedienne Real Warri Pikin shared a video of her visit to Empress.

Reacting to this, Etinosa in the post shared on Instagram, said people need to drop their phones and cameras and engage in the condolence visit they came for.

Etinosa claimed that if people are really touched by the sad incident, they would not tell their P.A to record them and share such videos on social media for publicity sighting.

She wrote: “I feel we can all drop our phones and cameras and really do the condolence visit we came for. Imagine me seeing someone recording himself or herself coming to my father’s house for condolence. Let’s all be emotional. Sensitive, emotionally involved and emotionally genuine. Not everything is content. Well. I guess we all grieve differently.

“If you are really touched, if it is not just for a publicity sighting for you, you will not have mind telling your P.A hold the camera. As I’m walking in, be recording. Record everybody. She’s crying record her. Then you sat down, edited, and even put the soundtrack. No, it’s offensive. Clout is good business but this one is not nice.”