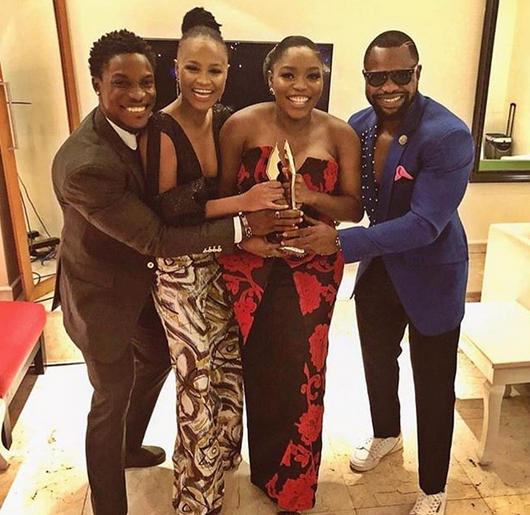 The Africa Magic Viewers’ Choice Award (AMVCA) is undoubtedly the biggest night for the film industry in Africa. Folks in the industry are rewarded for all of their hard work in the preceding year, their excellence recognized.

Of course, a gathering can’t be that huge and you won’t have spectacular moments that’ll take a while before fading out of memory.

Cobhams’ Remix of One Hit
On stage to perform during the live show of the award was producer and singer Cobhams. Host IK Osakioduwa had announced that the singer was there to perform his song “One Hit,” and, well, he did.

Cobhams gave us an on-the-spot remix, name-dropping everyone from Genevieve Nnajito Banky W. He got a standing ovation after his performance, and it was well deserved.

Bisola Winning the #AMVCA2018 Trailblazer Award
Soon after her performance, Bisola was completely blindsided when she was announced as the winner of the Trailblazer award. You could see the shook on her face when she arrived on stage to accept the award from Ireti Doyle.

Her jokes were characteristically funny, and when she was told she only had seconds more for her speech, she was so thankful.

She was rooting for Mariam Kayode, the 11-year-old nominated in the same category, she revealed, but we’re so glad she won.

Charles Inojie Gives Us a Live Performance of “Na Dem Dey Rush Us”
Host IK introduced Charles Inojie as one of the funniest comedy actors in the country and he proved it!

We knew we were in for a treat when he walked in, and he delivered.

The actor did not only perform the “Na dem dey rush us,” line, he also gave us the iconic laugh.

No doubt the funniest moment of the night.

The AMVCA Pays Homage to Movie Industry Icons who have Passed
The Africa Movie Viewers Choice Award paid homage to lost icons in the industry in the most moving way. #BBNaija 2017 star, singer and actress, Bisola Aiyeola gave a solemn rendition of Evanescence‘s “Immortals” while the names of the lost ones flashed on the huge screen behind her.

There was also the quiet procession of people with candles arriving to stand behind her as she sang.

Definitely the most moving moment of the night.