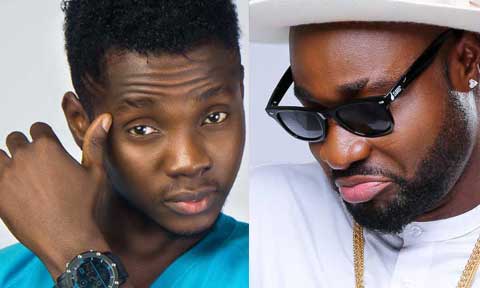 A cold war appears to be brewing between two emerging heavy weights in the Nigerian music industry Harrysong and Kizz Daniel.

Reports have it that Harrysong, the samankwe crooner is bitter towards industry golden boy Kizz Daniel over his verse in his new song selense featuring Reekado Banks.

The song selense featured mainly on gossips around the Nigerian entertainment industry in general regarding popular celebrities like Don Jazzy, Linda Ikeji, Tiwa Savage, Wizkid and the Okoye brothers (Peter and Paul)

Reports however have it that Harrysong had wanted to take part in the song, reaching out to both Kizz and Reekado to make the deal happen which they agreed to; the trio subsequently recorded their verses separately. The problem however started when Kizz Daniel regarded himself as the greatest artiste in the industry boasting that Harrysong couldn’t deny his claim.

Harrysong was reportedly saddened by the verse and stopped promoting the song on all his platforms. He then proceeded to do a remix with Dice Allies and Iyanya pushing it with massive airplays on radio stations across the country.

Harrysong explained that he abandoned the promotion of selense because according to him Kizz Daniel lacked respect and he was disappointed in him because of the verse in the song. He said he didn’t stop the song from being released originally because he didn’t want to disappoint fans who had been eager for the release of the song for some weeks.

“Let me make it clear today, Kizz Daniel is arrogant and proud. I was not happy with his verse on the song but I had to let it go because many people were already waiting for the song. The small boy lacks respect and I can’t continue to promote such song”