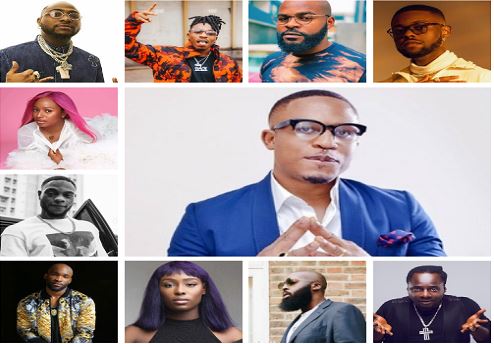 Davido hit the music industry in 2011 with ‘Back When’ featuring Naetochukwu ‘Naeto C’ Chikwe.

Mayowa ‘Mayorkun’ Adewale is the son of popular Nollywood actor, Toyin Adewale, prominent for her roles in Yoruba movies.

Mayorkun was discovered by Davido, who signed him to his label, DMW. After releasing ‘Eleko’ in 2016, the former banker has gone ahead to churn out other hit songs attracting awards and accolades from his fans.

Falz, who is also a trained lawyer, has award winning rap songs under his belt, and has featured in movies, winning the Africa Magic Viewers’ Choice Awards (AMVCA) twice.

Naetochukwu ‘Naeto C’ Chikwe is the son of Kema Chikwe, the former Minister of Transport, and then Aviation, during former President Olusegun Obasanjo’s administration. Kema is also a former ambassador to the Republic of Ireland. She is the National Woman Leader of the main opposition party, the Peoples Democratic Party (PDP).

Lekan ‘Lojay’ Osifeso Jnr, who is unarguably one of the raves of the moment is named after his father, Lekan Osifeso, Chairman of Retro Group of companies and Lekai Construction Company, a major player within the construction industry space.

Florence ’DJ Cuppy’ Otedola is the daughter of serial businessman, Femi Otedola, with stakes across different sectors of the economy.

DJ Cuppy started out as a DJ before trying her hands on music and recording success featuring artistes like Tekno, Zlatan Ibile, Teni, Fireboy DML among others.

Kach’s song titled ‘Dino’ named after Senator Dino Melaye went viral after he featured him in the music video.

The trap music singer has been one of the few voices promoting the genre in Nigeria.

Olawunmi ‘Tolani’ Otedola is also one of the daughters of businessman, Femi Otedola.

The rapper is one of the most important young people behind the solidification of the Alté movement and culture in Nigeria.

He has worked with artistes like Odunsi the Engine, Lady Donli and Cruel Santino on crafting their music projects. He’s also the Editor-in-Chief at The NATIVE – a key music publication for young Africans at home and in the diaspora. He co-founded the magazine with his colleague, Teezee of the DRB Lasgidi group, who is also a rapper.

Adetona ‘Tillaman’ Adeyemi who prides himself as ‘the real omoba’ is the son of Alaafin of Oyo, Oba Lamidi Adeyemi.