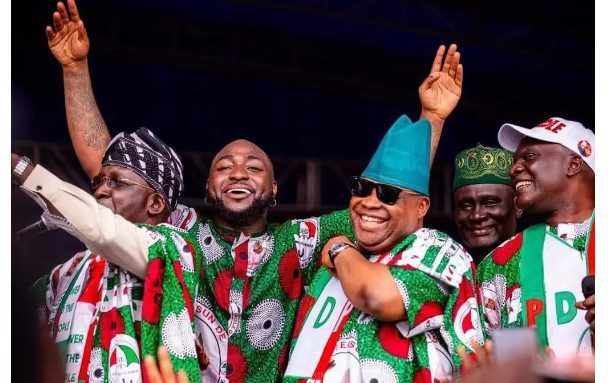 Nigerian singer, Davido has replied to a Twitter user who claimed that his uncle and Osun State Governor-elect, Ademola Adeleke, would loot the state fund.

Reacting to this, a Twitter user, with the handle Atiyuski, opined that Adeleke will use the state fund to build Atlanta Georgia.

He further expressed concern for Osun people, saying they made a mistake.

Atiyuski wrote: “Las las Adeleke will use Osun state money to build Atlanta Georgia. What a pity for the people of Osun State.”

Responding to the tweet, Davido said that his family already have four mansions in Atlanta since ’94’ and he can do a fact-check on it.

He wrote: “We‘ve had 4 mansions in Atlanta since 94 #factcheck”

Recall that the Independent National Electoral Commission on Wednesday presented the certificate of return to Ademola Adeleke.

The governor-elect, while accepting the certificate at a brief ceremony held at Osun INEC head office in Osogbo, dedicated his victory in the governorship election to the memory of his late elder brother, Senator Isiaka Adeleke and the people of the state.