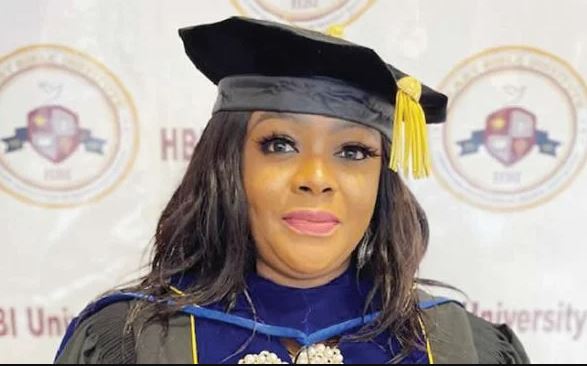 How I Became Lecturer In A US University — Nigerian Actress, Helen Paul Speaks

Dr Helen Paul, the Nigerian comedian, actress and academic, made the news early in the week when it was reported that she had been appointed as a lecturer at the Heart International Bible University, United States of America.

In a video posted on her Instagram page, the school’s Chancellor, Donrnett Mcintosh, could be seen announcing her induction as the Head of the Department of Arts, music and Entertainment.

Expressing joy at the new appointment, Paul told Sunday Scoop, “Whatever one does in one’s line of work will help one’s career growth. For instance, Nike Davies-Ekundaye of Nike Art Gallery is a beautiful woman and is one of my mentors. Her talent speaks for her both home and abroad to the extent of her getting recognised in universities globally.

“Also, I learnt that Prof Lamidi Fakeye of Michigan University, USA, got promoted on the strength of his artistic works (wood structure) at the Institute of African Studies, Obafemi Awolowo University, Ile Ife, Osun State, in the 1980s. This shows that talent works as well.”

Paul also stated that bagging a PhD three years ago at the University of Lagos was a plus for her. She said, “First, professorial positions are about what experiences one has had in terms of talent and research works, one’s PhD, and active and consistent engagement in a university.

“It is not really about furthering one’s studies. Rather, it is about being promoted by virtue of one’s pedigree and contributions to academia and humanity in general.

“In addition, the PhD I obtained in the prestigious University of Lagos is the key to my being relevant in a university or academic circle. For a while, I have been actively involved with teachings and affiliations with universities across the globe, using entertainment as a tool. Also, many of my performances are case studies for my research works.”

Paul also stated that though the new appointment comes with challenges, she was prepared to take them head-on. She said, “I feel very humbled and pray to have the energy, tenacity and capacity for the huge tasks ahead.

“I know it comes with very huge responsibilities, expectations, discipline, endless studying and a critical mindset to initiate ideas, analyse and evaluate positions and contribute meaningfully to both the academic community and society at large.

“The field is essential in performance appreciation, ethics and theories with a spice of comedy and its related forms. I thank Nigerians for celebrating their own.”