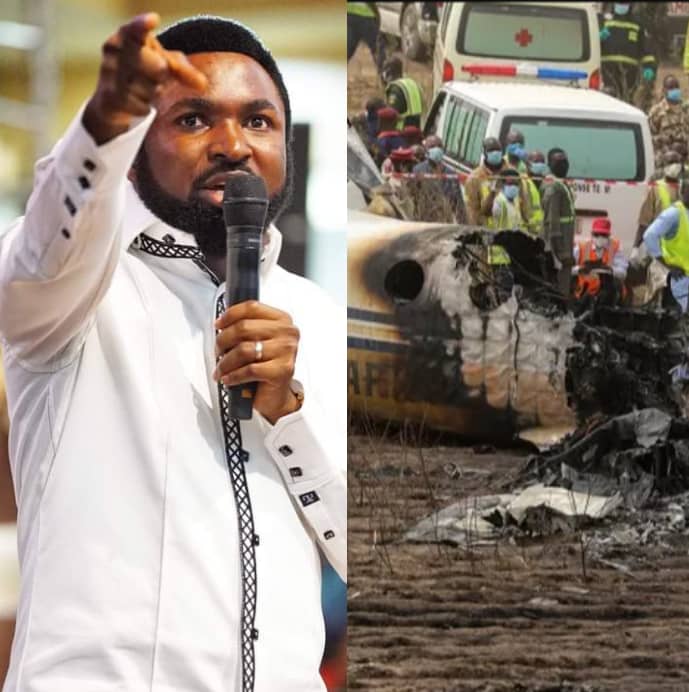 The Abuja plane crash, which on Sunday razed a number of military officials may have not escaped the spirit sight of a popular Abuja based Prophet, Dr Emmanuel Omale. In a video, which has gone viral on the internet, Prophet Omale, who is the Founder and Lead pastor of Divine Hand of God Prophetic Ministries International had revealed that the incident could happen and called on Nigerians to pray.

The Nigerian Air Force plane had on Sunday had an engine failure leading to the death of Seven people after the military plane crashed short of a runway outside Abuja airport.

While it is often said that genuine Prophets are the mouthpiece of God as God reveals to them the secrets things of life, Omale had in the video hinted on the incident while urging for precautions.

The prophecy was part of 32 others given on the 1st of January 2021 as seen on YouTube is now a talk of town.

While Omale gave the 32 prophecies for the year, which was published on various social media platforms, the 14th of the Prophecies is specifically on the crash and may have come to pass faster than expected. The man of God had admonished for prayer but sadly negative impact of the prophecy came to pass.

The Man Of God, who yesterday prayed for the souls of the faithful departed, pleaded God to grant the family, loved ones and the entire Nation the fortitude to bear this irreparable lost.