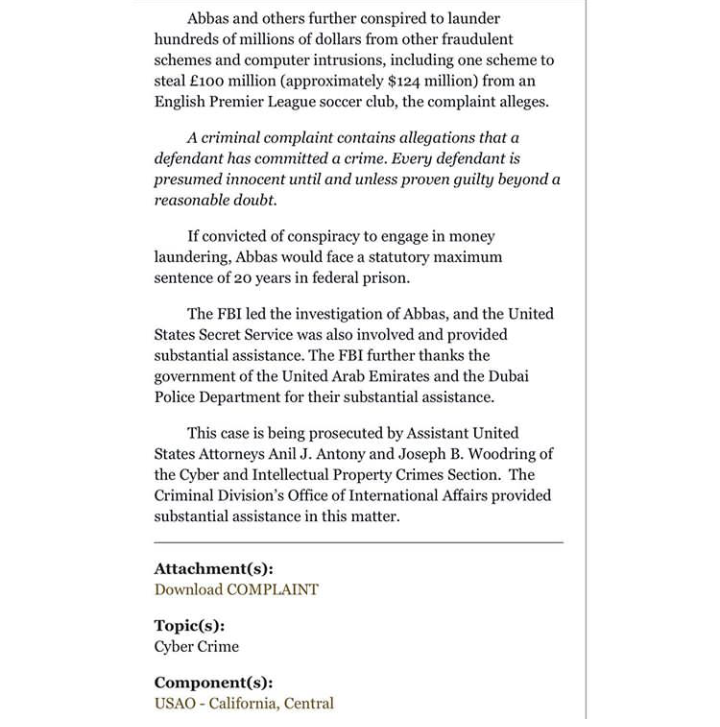 Hushpuppi is facing criminal charges alleging he conspired to launder hundreds of millions of dollars from business email compromise (BEC) frauds and other scams.

“If convicted of conspiracy to engage in money laundering, Abbas would face a statutory maximum sentence of 20 years in federal prison,” US Department of Justice said in a statement on Friday.

FBI’s Special Agent Andrew John Innocenti said in a criminal complaint filed before the United States District Court for the Central District of California that “beginning no later than October 15, 2019, and continuing through at least October 17, 2019, in the county of
Los Angeles, in the Central District of California, and elsewhere, the defendant conspired to launder proceeds
fraudulently obtained from a law firm.”

Hushpuppi was arrested in a Dubai hotel in June and was extradited to US on Wednesday.

DOJ said he arrived in Chicago on Thursday evening and made his initial U.S. court appearance on Friday morning in Chicago.

He will “transferred to Los Angeles in the coming weeks,” DoJ said.

DoJ said according to the criminal complaint filed on June 25 by federal prosecutors in Los Angeles against him alleged that Hushpuppi and others committed a BEC scheme that defrauded a client of a New York-based law firm out of approximately $922,857 in October 2019.

Hushpuppi and co-conspirators allegedly “tricked one of the law firm’s paralegals into wiring money intended for the client’s real estate refinancing to a bank account that was controlled by Abbas and the co-conspirators,” DoJ statement said.

“The affidavit also alleges that Abbas conspired to launder funds stolen in a $14.7 million cyber-heist from a foreign financial institution in February 2019, in which the stolen money was sent to bank accounts around the world.

Abbas allegedly provided a co-conspirator with two bank accounts in Europe that Abbas anticipated each would receive €5 million (about $5.6 million) of the fraudulently obtained funds.”

“Abbas and others further conspired to launder hundreds of millions of dollars from other fraudulent schemes and computer intrusions, including one scheme to steal £100 million (approximately $124 million) from an English Premier League soccer club, the complaint alleges.”