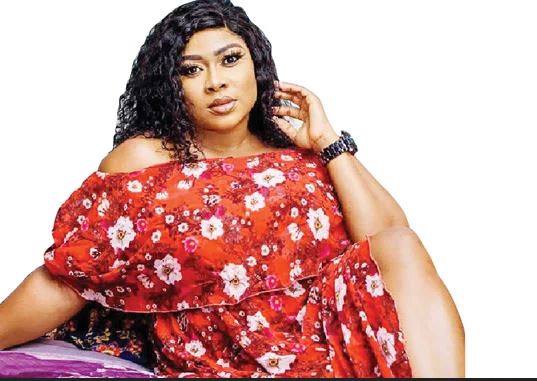 There is no doubt that actors are sometimes faced with the task of playing odd roles they are not comfortable with. Such is the story of actress, Queeneth Agbor.

In an interview with Sunday Scoop, she revealed that her most embarrassing moment on set was when she had to act in a romantic role alongside the husband of a family friend.

“My most embarrassing moment on set was having to ‘make out’ intensely with a family friends’ husband, who happened to be my love interest in the movie. It was extremely awkward but I had to do it for the love of acting.”

Agbor also disagreed with the notion that actresses could not make good wives.

She said, “You can’t force people with low quality taste to see the light. Shame on any man who has such a mentality. Anyway, that’s such a person’s loss; we don’t even need such men around us.”

The actress also stated that contrary to a school of thought, she believed that it was possible for a female to have a male best friend without sex being involved.

She added, “Speaking for myself, I would say it is very possible. I used to have serious issues with my partner having a female best friend. That was until I met my God-sent best friend, Akeju. We share the purest, truest form of agape friendship. We see ourselves as friends and nothing more. My mentality suddenly changed. Members of the opposite sex can be best friends with one another and share a strong pure bond without involving sex.”