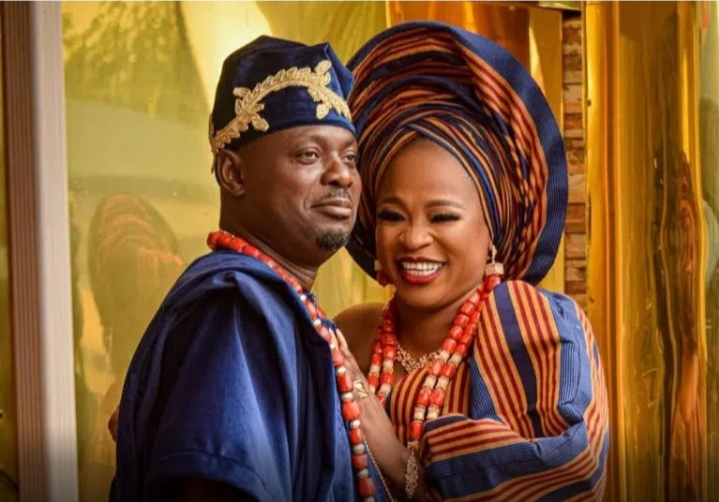 “I Won’t Leave Him Even If He Gets Every Woman Pregnant” – Actor Kunle Afod’s Wife, Desola

Desola Afod, the wife of Nollywood Yoruba actor, Kunle Afod, has blasted a troll who said her husband is having an extramarital affair with a woman in Ibadan.

This is coming in the heat of crashing marriages witnessed in the Nigerian entertainment industry since the beginning of September.

Amidst these crises, Desola was not left out in this case as a troll had attacked her for wanting to kill herself because of her husband, who has refused to stick to her and has gotten another wife in Ibadan, who is also pregnant for him.

“Why do you want to kill yourself for man that does not LOVE you. Na only you dey love up and down. Which dirty afod husband are you praising. That has another wife and in Ibadan and she is presently Pregnant and they both planning engagement soon you will hear the news.”

Clapping back at the unnamed individual, the celebrity wife said that she will not leave her husband even if he gets every woman pregnant because their children will finally be a slave to her children.

Desola added that she doesn’t need Kunle to love her as much as she loves him.

Ayra Starr Reacts As Fan Compares Her To Simi
Singer K1 Shows Off His Alleged New Wife
‘Your Fat Nose Like A Cow,’ Bobrisky Claps Back At Actress Seun Osigbesan
No Comments YetDrop a Comment