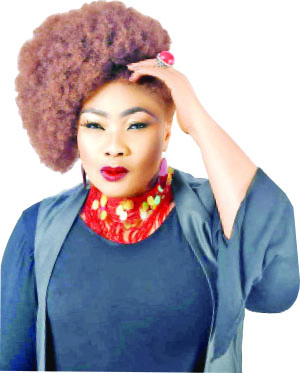 Eucharia Anunobi, the veteran Nigerian actress, has been in the business of movie making and winning souls for Christ, for over two decade.

Despite her divorce and losing her only child in 2017, she has never looked back.

In this interview, she takes us through her challenging moments as an actress and minister of God, including her marriage plans and lots more. Enjoy it.

You are now a PhD holder, what is expected of you?

I am expected to do much more with regards to continually educating my generation, to see things better in terms of trying to upgrade themselves and also to ensure that I contribute my quota to the educational system, because I can become a visiting or a full-time lecturer in any university of my choice within or outside Nigeria. Of course, when you are up there on the academic ladder, it is naturally expected of you to pass on knowledge and wisdom to your generation for them to become better people.

Many people believe filmmaking is worldly and ministers of God should not be involved in it. How do you balance the two?

It’s quite unfortunate that a lot of people believe filmmaking is worldly and ministers of God should not be involved in it. I want to say, first and foremost, that everything about our world, the world we live in, the earth is worldly and nothing that is and was ever created is or was created by the devil. Everything that we see upon the face of the earth, its origin came from God. We can say that people began to digress to begin to produce or manufacture things that do not glorify God. Be that as it may, filmmaking is a mighty platform, a platform that has its foundation on giving out information and entertaining the world. Filmmaking is also a platform through which the gospel can be preached. So, I think it’s a wrong notion for people to think and believe that filmmaking is worldly and immoral. Filmmaking is a medium that ministers of God should embrace even much more to propagate the gospel. There is absolutely nothing wrong with ministers of God, pastors, bishops, apostles like myself, doctors like myself,  getting involved in making and acting movies, because generally in the midst of the rubble, let us not forget, God makes something out of the seemingly unbefitting things. So, while others may be worldly in whatever they are doing, as ministers of the gospel, we distinguish ourselves and were different.

Evangelism is not only confined to the church. Kindly explain how you have been using films as a tool of evangelism?

Naturally, films being used as tools of evangelism with regards to the fact that producers who write scripts that are faith-based call me to act in most of them. I’d say that has been the means of propagating and evangelizing the gospel so that people can watch the movies and have the gospel broken down to them in pictures in the form of movies. Apart from that, our daily lifestyle, my daily lifestyle of showing love, of forgiving as quickly as possible, of trying to make amends, of trying to be more understanding, of apologizing as quickly as possible when you have done wrong; all these are ways of evangelizing. Our daily activities and ways of doing things are also gospel in itself. So, when we say we are born again, its not really about preaching or reading the words of God, it’s about living it because the truth of the matter is, Christianity is not, has not and was never a religion. Christianity is a lifestyle of living in love, lifestyle of living in truth. The lifestyle of teaching others how to live in love, the lifestyle of forgiving, the lifestyle of believing, the lifestyle of having faith, the lifestyle of not running out of patience, the lifestyle of working hard, the lifestyle of knowing that if you want good things, you have to labour for it. It’s not a religion because a religion is something that takes the format of you observing certain rituals at particular times of the day, week or year.

What are your challenging moments as a minister of God who is also an actress/filmmaker?

With regards to the challenging moments, people assume that being an actress, you cannot also be a prophet. That being a filmmaker you cannot also be a vessel for God to use to bless people, but I’m bringing a change in the narrative. I am becoming, I have been and I am being what they call a trailblazer to changing the dynamics to how people see artists, actresses or filmmakers. I am changing the narrative for them to see that yes, one can be an actress or a filmmaker,  but you can also be a great vessel of honour. There is no area of life in terms of career or profession that God cannot use, because there are doctors, teachers, and engineers who are pastors. So, who says that an actress, actor or filmmaker cannot also be a pastor? Be that as it may, if that has been the mindset of people, well, God is saying that I’m changing the dynamics and narrative through my daughter, Apostle/Doctor Eucharia Anunobi to show the world that everything that exists upon the face of the earth, God is the creator and owner of it all and he can use anyone He decides that He wants to use. God can use a carpenter to become a preacher, so why can’t He use an actress or filmmaker as a minister?

As an actress, you are expected to interpret any role. What are the roles you would rather not take now because of your status as a minister in the church?

As an actress, I’m supposed to interpret every role that has been assigned unto me. I want to say there really is not a role I will not take because to be actor or actress is a professional career, and if one decides not to do the job, some other actors will take on the job. Not just because I am a minister of the gospel of Jesus, as an apostle, even others who don’t have that title or status, there are some roles they would not also take. However, I have one or two roles that I may not take in as much as I would act every role as long as it’s going to give out messages of reconciliation, of informing the people. So, maybe I may not take roles that have to do with me drinking alcohol or smoking (cigarette) because I don’t drink or smoke in real life. Or we would find a way around it where I may not have to touch the cigarette or for instance, if the character is expected to drink beer, they can get a beer bottle, wash it and pour in malt, and then as an actor, I would act it as if I’m drinking and getting drunk, because that is what acting is all about, interpreting the role, trying to become the role. Then, any other role that would require an undue exposure of the body, I would not want to partake of it. Even prior to when I became born again and before I got ordained, I didnt take on roles where there was an unnecessary exposure of the body.

What guides the type of role you accept?

I must ensure it has a good storyline. I would ensure that the story and the roles have messages for the audience. I would also ensure that the story and the film is entertaining, because two major things expected of any movie are that it should be entertaining and educating. So, these are the things I watch out for before I accept any role and which guide my signing to be part of any movie.

Since you are ordained as an evangelist, what are the new insights you have gained about life and your acting profession?

Since ordination and even prior to ordination, one thing I’ve always learned and one thing I know for sure is I’ve always had a very intimate relationship with God. And it is through that intimate relationship that I understand that in life, for you to make it, for you to rise, for you to know what you want, you need to be closer to God, you need to have fellowship with God. It is in the closeness and fellowship with God that I got to understand that, whatever you do, do it very well, it will bring you before kings.

You are one of the veterans of Nollywood that are still active in the industry, what are the changes you will like to see?

One of the changes I’d like to see is that we should be paid better. I also want more financiers to come into the industry because this is an industry that needs money for it to operate. Sponsors should come in, and the government should enact laws to protect the literary contents of producers and writers. I also want the government to put structures in place that would give us enabling environment to function, to produce movies; and above all, to put in place things that will ensure that people who have laboured ceaselessly in the industry are truly honoured.

Will you consider giving marriage another shot?

Sure, I would want to get married. I’m looking forward to getting married. And surely, I believe it will happen at the fullness of time because God has already said that it is not good for the man to be alone. So, I am looking for (husband), I’m single. So, if you have anybody who loves me or likes me and feels that I’m the woman of his dreams, please bring him.

What do you look out for in a potential suitor?