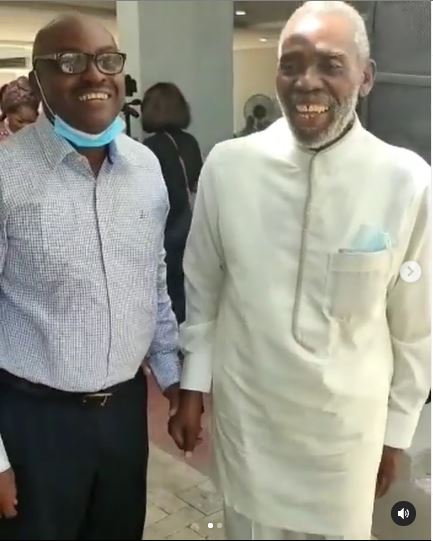 One of Nigeria’s most respected actresses, Joke Silva, has shared a recent video of Olu Jacobs, her husband to once again quell speculations that he has passed away.

The movie star shared the short video and a photo taken during her 60th birthday party which was held recently via her Instagram page on Sunday.

In the photo, Jacobs is seen with smiles etched on his face as he stood beside his wife during a shoot to mark the occasion.

Joke also accompanied the clip with a terse post, wherein she appreciated her followers.

“Enter His gates with thanks giving and His courts with Praise….Have a peaceful Sunday insta fam,” she wrote.

Last Tuesday, rumours had swirled on social media platforms that Jacobs had died after battling with an undisclosed sickness.

Joke had earlier dismissed the speculations, adding that her husband remains “hale and hearty”.

Abubakar Yakubu, national secretary of the Actors Guild of Nigeria (AGN), also asked the public to disregard the death rumour.

“Please disregard the report. Uncle Olu is alive, hale and hearty. Confirmed,” he had said.

The actor had been in the news on several occasions over similar death speculations.

In June last year, the AGN had also dismissed such rumours and warned “mischief makers” to desist from such “wickedness.”

“The national president of the Actors Guild of Nigeria is in touch with the family. We use this medium to warn mischief makers and enemies of our industry to desist from this wickedness,” it had said.