Kemi Olunloyo has shocked Nigerians after she disclosed on social media that Davido’s babymama, Chioma doesn’t have COVID-19 as claimed by Davido.

Weeks ago Nigerian singer Davido revealed that his fiance Chioma has tested positive for COVID-19 after going through the test and has been isolated though she’s yet to show any sign.

According to Davido among all the 32 people including his son Ifeanyi who went through the test, only Chioma tested positive.

Some Nigerians doubted the singer’s claims saying he’s chasing clout while others were of the view that it’s his strategy to release his new song. Some even called him out to go for another test and it also came out positive.

In Kemi’s new post, she stated that no one needs to take her serious, hence the truth about Chioma having COVID-19 is still hanging. 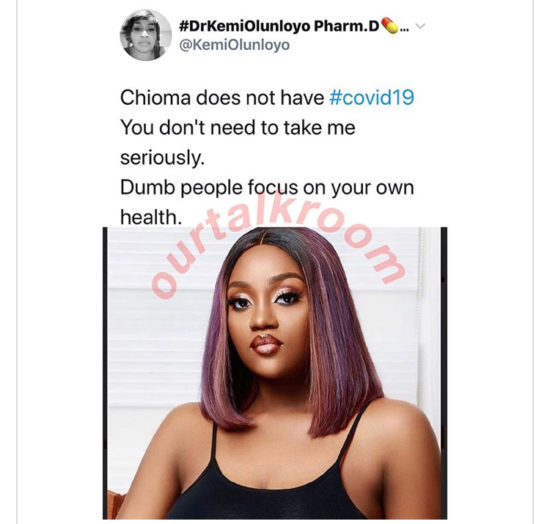 Meanwhile, Chioma shared a photo yesterday for the first time from isolation centre. She has been off social media since her baby daddy, Davido broke the news that she tested positive to coronavirus.