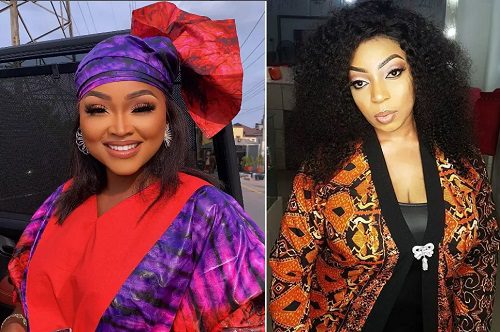 Actress, Mercy Aigbe has revealed that she didn’t get hurt after a businesswoman, Lara Olukotun threw bottle at her at an event in Lagos on Sunday, June 12.

Recall that we had reported how the duo fought dirty at a Lagos event resulting in Lara throwing a bottle at Mercy.

However, Mercy said the bottle injured another person at the party, not her.

In a statement released this night on her Instastories, Mercy alleged that Lara has been verbally attacking her online for a while.

She said she tried to reach out to Lara to know the reason for the sudden hate since she was an acquaintance and someone who she had patronized her business in the past. Mercy said all efforts to reach Lara prior to the Sunday incident failed.

The mum of two claimed that Lara started it all when she saw her at the Sunday event and started to verbally assault her.

Mercy said all attempts to stop her by other guests failed as Lara continued to call her unprintable names, and that she had to stand up for herself.

She said it was at this point things took a different turn.

She ended her statement with an apology to anyone who felt she could have handled the situation better.