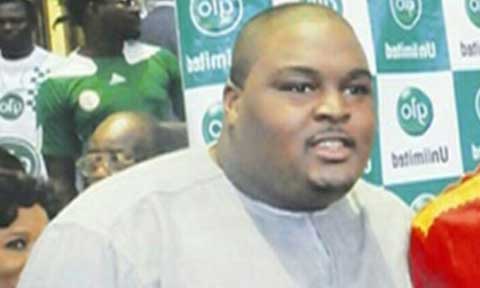 He was alleged to have refused to release the child to her mother despite a court order which reportedly granted him access to the child only on weekends.

It was gathered that Eniola and the child’s mother, Damilola, dated during which the 25-year-old became pregnant and had the child.

Disagreement was said to have broken out between the duo and their families, resulting in a legal battle for the custody of the child.

Punch Metro reports that in September 2017, a Tinubu Magistrate’s Court gave an interim order, which awarded custody of the child to the mother.

While Eniola was given unrestricted access to the child, he was, however, asked to pick her every Friday and return her to the mother on Sunday.

The arrangement was said to have been running smoothly until on May 18 when the father allegedly took Athena from school.

In a petition to the Lagos State Commissioner of Police, Edgal Imohimi, the Falana and Falana Chambers, which is representing Damilola, said Eniola’s action was “tantamount to abduction.”

The law firm explained that the violation of the court order could result in a breach of the peace, urging Imohimi to bring Eniola to book.

The petition read in part, “On Friday, May 18, 2018, our client dropped off Athena at school (Marymount School, Rachael Nwagwu Street, Lekki) around 8.30am, as usual. About 2pm same day, our client returned to the said school to pick up her daughter. To our client’s dismay, the school told her that Mr Eniola Adenuga in company with some mobile policemen came to the school and forcefully took Athena away without her school bag.

“Our client immediately called Mr Eniola Adenuga to find out why he took the child away without her consent, contrary to the order of court that our client remain in custody of Athena and access given to Mr Adenuga every week from Friday to Sunday in company with Athena’s nanny.

“Mr Adenuga did not take the calls or respond to message sent to him by our client till date, safe for his one sentence response that he had taken Athena. Till date, our client does not know the whereabouts of Athena and has confirmed from the school that Athena is not in school.

“Our client is distressed as the conduct of Mr Eniola Adenuga is likely to cause a breach of public peace.”

A family member, who asked not to be identified, said Damilola had been traumatised by the incident.

He said, “The arrangement was that the mother picked the child from school and Eniola takes her from the mother. On that day, the mother was told that Eniola came to the school and took her.
“Since that time, the school authorities said they had been sending her homework to the father through email. All efforts the mother made to reach him had been abortive. The only time he responded, he merely said he had switched custody to himself. We are talking about a three-year-old girl that has never been without her mother for this long. The mother is a pharmacist who has her own source of livelihood.”

Damilola confirmed the incident to our correspondent, but declined further comment.

“Please, just help me get my child back,” she said.

The school’s owner, Dr Adeola Owodunni, said she could not speak with our correspondent on the matter.

Eniola, when contacted on Tuesday, promised to call back.

PUNCH Metro was expecting his call when one Deji, who claimed to be Eniola’s friend and lawyer, called to speak for him.

Deji said there was no issue of abduction because Eniola picked the child on a Friday.

He explained that he decided to keep her because an application for an extended custody (beyond weekend) of the child was truncated after the case was transferred.

He said, “What he did cannot be said to be illegal. He has every right to his child. The child was born after a relationship between the parties, which did not work out. If not for the case in court, this matter would not have got to this level.

“There is an application before the court for an extended custody. Midway into that, the case was reassigned because they (Damilola’s lawyers) wrote a petition (against the magistrate). The case has been transferred without a ruling on Eniola’s application (for extended custody).

“Usually, he takes the child on Friday and returns her on Sunday. So, the child was taken on Friday, but on the Wednesday/Thursday preceding that Friday, the case was transferred. So, already, the child is with Eniola. The transfer coincided with that time; so, the thing is hanging.

“He took the child on the Friday that he usually picks her. Later that Friday, the (court) registrar called and said the case had been transferred to Ikeja (court). Ikeja needs to assign it to a new judge, who will go over the case file.”