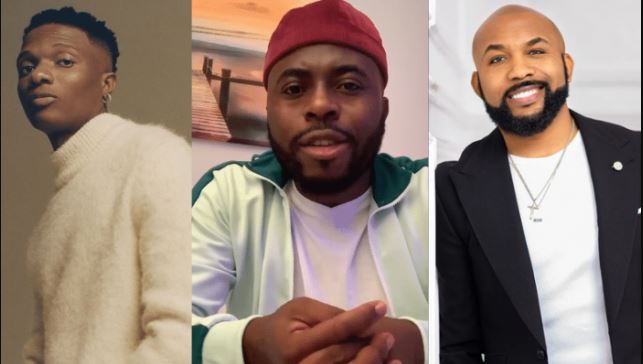 Samuel Oguachuba, the music producer, who is popularly known as Samklef, has slammed singer Banky W, as he demanded his royalties for Wizkid’s debut album.

Wizkid, who was formerly signed to Banky W’s label, EME records, released two albums ‘Superstar’ and ‘Ayo’ under the label.

In an Instagram live video late Friday, Samklef, who produced Wizkid’s then hit song, Pakurumo, off Superstar album, claimed that Banky W failed to properly compensate him (Samklef) for his input in the hit song.

According to Samklef, Banky W, whose real name is Bankole Wellington, told Wizkid to remove Samklef’s name as a contributor in the song.

After addressing the issue on his Instagram life, Samklef took to his Twitter page to state that he would claim his royalties for Wizkid’s album.

He tweeted early Saturday, “Claiming all my 11 years royalties for Wizkid’s Superstar album in a bit. My lawyers will reach out. It’s 50/50.

“Anybody wey don collect my money better reach out o! Samkef fine were o! Make dem tag Banky o! My money go don plenty o! Before him go use am campaign for election.”

Banky W recently announced his interest to battle a seat in the House of Representatives to represent the Eti-Osa federal constituency.

Speaking to media personality, Ebuka Obi-Uchendu, in the interview, Banky W said, “There’s no need for us to try and tie him down. It was a five-album deal in the beginning and he had done two solo albums. He still owed three, but he wanted to leave. I don’t want anyone to stay when they don’t want to.”

Samklef, in his Instagram live video, however, claimed that the interview was staged, as Banky W and the show host were close friends.