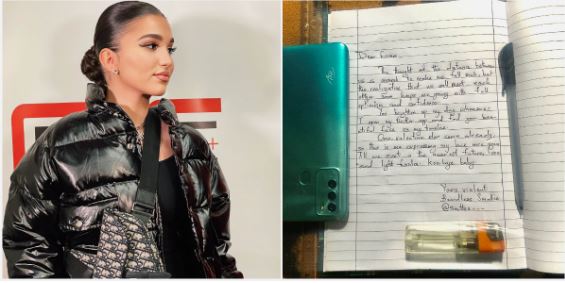 A Nigerian man has dumped his fears and professed his undying love in an open letter to an American musician on Valentine’s Day.
Using the old way of expressing love with the new, the man with the handle @SMiTHie_ took to Twitter to tell his crush, an American singer, Enisa Nikaj how much he loves her.
In the open letter which has gone viral, @SMiTHie_ expressed his undying love for Enisa and how he hoped to meet her someday despite the apparent distance between them.
He went on to call her by the Yoruba name she adopted – Eniola – and maintained that though another Val may have come and gone, his love for her remained.
Enisa on sighting the tweet with the handwritten letter gave a reply.
She described his handwriting as incredible and added that the letter is adorable and sweet.
Her response has generated huge reactions from her Nigerian fan base and others who came across the viral tweet.
@DanielRegha commented:
“No disrespect to anyone but it’s a p!ty that with the numerous problems facing Nigeria on a daily, majority still preoccupy themselves with unimp¤rtant things. Everyone should use his or her voice to create awareness, cruise or clout chasing won’t better Nigeria. Lend ur voice.”
A guy with the handle @eniturn reacted:
“It worked for Asiwaju, it worked for Beardless smallie, time to shoot my shot at Yemi alade!!!”
@Irunnia_ said:
“The lighter is proof that he will light up your world if you give him the chance.”
PAY ATTENTION: Click “See First” under the “Following” tab to see Legit.ng News on your Facebook News Feed!
Meanwhile, Legit.ng earlier reported how a white woman responded to a Nigerian man who professed love to her.
In her reaction, the woman told Ifeanyi that she’s married. She wrote:
“I prefer pictures of birds to boys, although I’m tempted to put this picture on my refrigerator next to the Dr….My husband would be very confused. (We’re very happily married – he doesn’t mind some teasing)”.