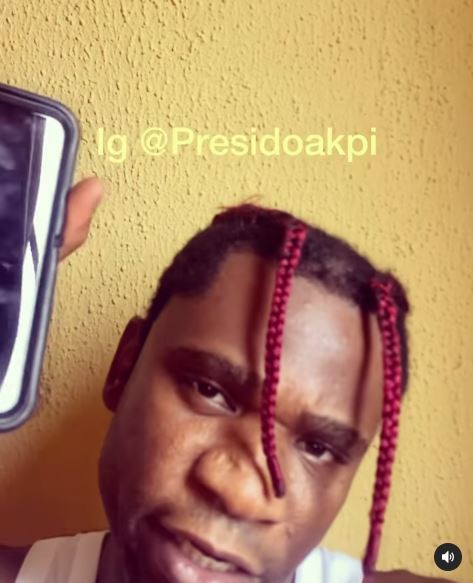 US-based Nigerian musician, Speed Darlington has released a statement after being arrested by the police.

The musician said he has been released as he narrated his experience in the hands of police.

I’m In the airplane shout out to all my supporters and everybody who is checking up on me ; I asked the police man why did you stop me he say I look like a kidnapper I ask how does kidnapper look? he couldn’t answer, there was no probable cause you know me I did not give kobo.

This is not fraud money covered with music this is pure music/work money Bleep you mean throwing my earnings left and right for what? I was willing to stay three hours four hours just because I’m right. you’re not getting paid and it did not happen all my money in my pocket DPO Ajah even called me to beg in his officer behalf.

He call me “please remove the video on instablog I said no I’ll go use guys shine. I knew last last it was the way I dress gold chain everywhere I look like money they believe if they delay me longer enough I will give in they don’t know that I don’t have kids or wife all I have is time. Shout out to my neighbors for intervening when they saw me.

The worst part is when I got to mainland I ran into useless alaye who refused to let me pass for no reason say I must give them money; like play like play one got into my car in trying to break away from them I used my door slice one okada passenger foot   as I was trying to escape from my car to outside to create sene so people can pay us attention which work, I wish I can find the boy let him hold some cash I destroyed his left leg with my ccar door trying to escape area-boys because I wasn’t going to give any bastard my money I did not give police with gun why would I give a thug that has no gun? If this was a America I would have wasted to alaye today and get away with it in 6months case dismissed. If you see the way they assaulted me use of firearm would have been justified.