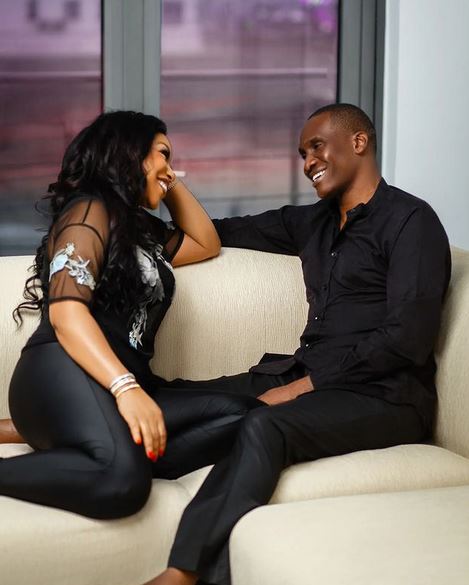 The Daily Times publisher posted a lovely photo of the couple on Instagram on Wednesday, smiling, reassuring fans of their love for each other.

Rita Dominic’s husband, Fidelis Anosike has dismissed reports of turbulence in their marriage.

The Daily Times publisher posted a lovely photo of the couple on Instagram on Wednesday, smiling, reassuring fans of their love for each other.

This came after Rita’s business partner, filmmaker, Mildred Okwo stated that the rumour was false.

Weeks after Rita and Fidelis tied the knot, a blogger known as Gistlover claimed that Rita’s husband had an affair with two of her best friends who attended her traditional wedding.

The controversial blog alleged that Fidelis Anosike was involved with some undisclosed Nollywood stars alongside Rita Dominic before finally settling down with the latter.

The blogger claimed their initials start with the letters U and I.

Reacting to the speculation, many who believed that the letter U stands for actress Uche Jombo stormed the comment section of her Instagram posts and asked her to clarify if the rumour was true.

Responding to the accusation, Uche urges the blogger to reveal the real names of those involved so she can be left alone.

“It will be lovely to tell your people who you are talking about so they can leave my page in peace,” she wrote.