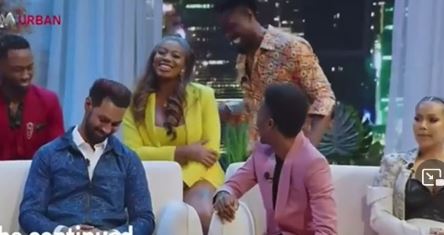 Ex-BBNaija housemates, Boma and Angel have made up at the reunion following their altercation in the house.

Recall that a fierce argument had broken out during the Big Brother Naija show which saw Boma and Angel hurl insults at each other.

Despite saying hurtful things to each other, Boma was said to have made more cruel remarks about Angel.

In a recent development, during the BBNaija Reunion, Angel pointed these out to Boma; she mentioned how he insulted her parents, capitalized on her mental health issue to ridicule her the more, and said her biggest achievement was being in Biggie’s house.

Boma who undoubtedly felt rue tendered an apology and went on to hug angel.