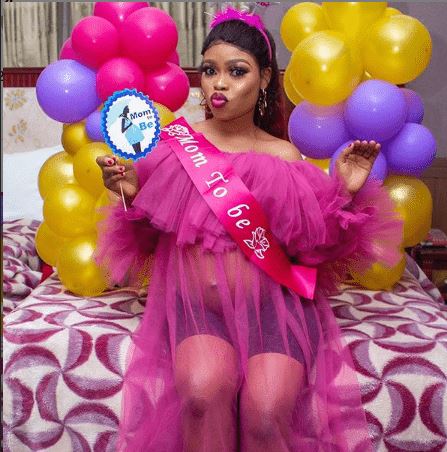 The Stupid Things I Have Done For Love – Actress, Toksbarbie Opens Up

With over 200 movie apperamces and having produced five of her own, pretty actress, Rasheeda Olatokunbo Jolaosho a.k.a Toksbarbie, has continued to wax stronger.

In this interview, she opened up on her career, new movie and relationship with the boss of the National Union of Road Transport Workers (NURTW), Alhaji Musiliu Ayinde Akinsanya popularly known as MC Oluomo. Enjoy it.

What have you been up to lately?

After giving birth to my baby, I produced two different movies, Rasheedat Omobe and Aleeba. Now, I am taking a little break from work so I can have time for my baby.

You know, motherhood can be a little bit stressful, especially if the mother is very attached to her child.

What has motherhood changed about you?

Becoming a mother has empowered me the more.

Aside becoming emotionally vulnerable, I’ve found my inner strength and confidence. I see a new and better me now that I’m a mother than when I was single.

Are you saying you’re happier now that you are a mother than when you were a single lady?

Yes. Being a mother is one of the most important roles a woman can play, because it gives you purpose in life. And when you know your purpose, you will always work hard to be a better person.

Tell us about your relationship with MC Oluomo?

I have known MC Oluomo for more than a decade now. He’s my godfather and nothing more. Yes, he played a major role in my life, and for that reason, we bond like father and daughter.

How do you intend to balance motherhood and acting?

I’m one leg in, one leg out for now. I am not fully back; I’m still on a little break.

Aside acting, what else do you do?

I do a lot; believe me. I am an entrepreneur; I buy and sell. In fact, I deal in so many things.

You bounced back to a perfect shape after the birth of your daughter. What’s the secret?

In fact, I couldn’t believe it myself. I have a detox tea I use. One of my senior colleagues, actress Ayobami Ojo popularly known as Oyita gave it to me. We are close so she gave me

to go and test it and I was very impressed with the result. So, I went for more.

How best do you relax?

It depends on my mood and account balance. I could decide to chill out with friends or just jet out of the country to anywhere I wish. It all depends.

Are you still open to marriage or you’ve sealed up on it?

I don’t want to talk about that because I wouldn’t want to open an already healed wound. I hope you under- stand. But in all, I am still very open to marriage. I believe so much in love. Love is a beautiful experience.

If you have the opportunity to change anything in life your life, what will it be?

I will go extra length to take my place in people’s life. Sincerely, it’s not worth it. Whoever wants to stay should stay and whoever wants to leave can leave.

Have you ever thought of dumping movie making?

Hell no! Not now, not ever! It’s my passion and what gets me going.

What’s the most stupid thing you’ve ever done for love?

I overlooked a lot of things and skipped the fact that the man was a talkative, as well as a dog that sleeps around.