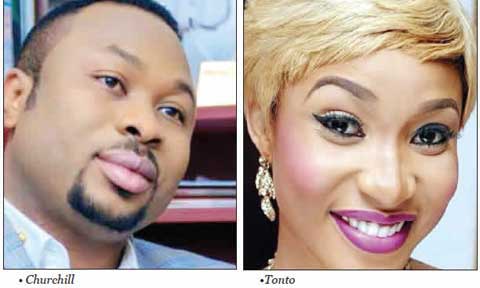 Nigerian business and philanthropist Olakunle Churchill who is also the ex-husband of Nollywood actress Tonto Dikeh has clapped back at Tonto after she shamed him online.

Olakunle was called out by a business outlet who accused him of stealing from their home in Ghana and not paying them their full rent during his stay with then wife Tonto at Ghana.

Tonto Dikeh was fast to reply the business outlet giving out proper means on how they can get to the ex-husband since he is ignoring their calls.

Replying this, Churchill has told her to stay away from him as she is neither his PA nor secretary as he thought she had moved on from their split.

He said; “With regards to the post on in-t-b-og–a, about someone calling me out.i feel it’s baseless and a way to pull my personality down. We have more than 6 ongoing projects within that axis.

Ghana is not my country as such my staff and expatriates are occupying four buildings and the manager’s name is Ralph Codjoe +233 2- 64- 472- If at all anyone tried to reach me based on anything concerning Ghana because I relocated because of family over three years ago.

As for you mama king, thought we have moved on and you are not my pa neither my secretary henceforth desist from anything that concerns me. Lastly you should know by now with all you have tried, that no one can pull a man down especially one with the grace of God. My interest is my son, whom you have deprived me of seeing 14 months before the court case.

I was able to see my son after the court granted me of sharing custody which was before his birthday. You and your lawyer have refused to oblige to court orders 4 times including his last holiday. Please Channel this same energy on responding to court order.”