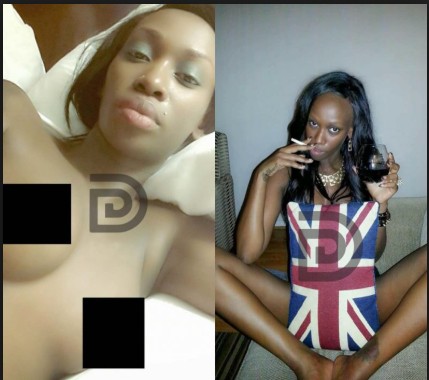 It was earlier reported that a socialite was on Tuesday afternoon arrested by the police over her nude pictures and indecent video that were leaked on social media in May. It was said that the Ugandan celebrity, Judith Heard was arrested after she was sighted in public – weeks after she had reportedly failed to respond to her repeated summons since police started investigations into her leaked nude pictures June.However, Judith has come out to clear the air saying that she handed herself to Police but wasn’t arrested like many thought.

According to reports, Heard on Tuesday reported to the Central Police Station in Kampala in the company of her lawyer, James Katono and sisters after information leaked to her that the police were planning to arrest her.

She arrived at 8:00 am, but was kept at the station up to 9; 30PM during which time her lawyer pleaded with CID detectives to release her on bond.

She was later given bond but ordered to deposit her passport and asked report back on Friday. Luke Owesigyire, the spokesperson of Kampala Metropolitan Police confirmed that Heard was released on bond after making a statement.

He stated that she is accused of producing pornographic pictures and videos of herself and posted them on social media contrary to the Anti-Pornography Act 2014.

The Act prohibits production and circulation of pornography materials and if convicted, she is likely to face a jail term of two years, a fine of sh5m or both.