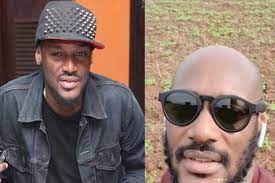 2face Replies Lady Claiming To Be His Daughter

Award-winning musician,  Innocent Idibia aka 2face has reacted after a lady took to social media to claim that she is his daughter.

The father of seven shared a teaser from the music video of Tiwa Savage’s ‘Somebody’s Son on Instagram on Wednesday, commended the singer for the song.

Reacting under the comment section, a user with the handle @bbn_update202 alleged that she is the daughter of the woman 2face impregnated in Enugu.

“Too baba, I’m dat ur daughter, dat one lady in Enugu gave birth to for u but u forgot, please don’t forsake me, daddy,” the user wrote.

Responding to the user, 2face wrote: “Oh wow, hello daughter. It is well with you.”