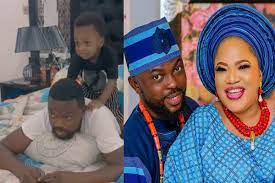 Nollywood actress, Toyin Abraham Ajeyemi has revealed that marrying her husband Kolawole Ajeyemi and giving birth to their child makes her feel like a woman.

The couple got married in July 2019 after her marriage to Adeniyi Johnson crashed.

The couple welcomed their first child together in August 2019.

Her words: “It (referring to motherhood) is a new experience and it’s has really changed me. I can tell anybody now that I am a woman coupled with the fact that I married to a good man. My name now is mummy Ire. Motherhood has changed my life.”

Meanwhile, Toyin, who is a movie producer, said she started making money four years ago about 13 years after she began her acting career in 2003.

She revealed that measures she and her team put in place to ensure that those who benefitted from her giveaways online are people in need.

“Before I give people money, I check their social media accounts to know when they came into into existence,” she said.