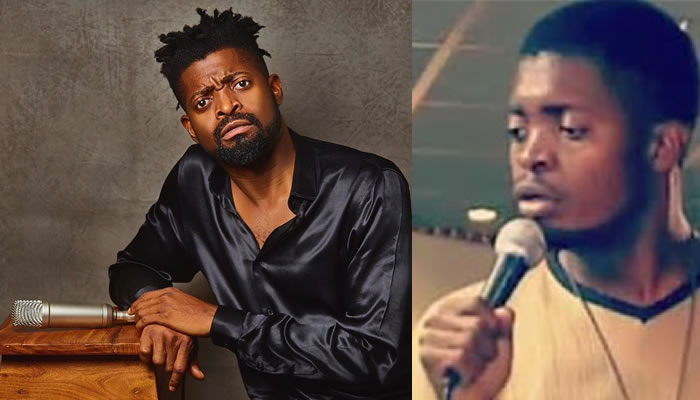 Basketmouth is a Nigerian stand-up comedian birthed as Bright Okpocha on the 14th of September, 1978. He’s a native of Abia state, but was given birth to in Lagos state. He studied at Apapa, Lagos during his primary and secondary education acquisition, he moved to Benin and gained admission to study Sociology and Anthropology at the University of Benin, Benin City, Edo state. In 1991, Basketmouth realized he could drum skillfully after years of learning to play the instrument. In 1994, Basketmouth took up rapping as a professional musician. He was a good rapper, and later formed a 7-member group called “Da Psychophats”.
In 1995, Basketmouth would go from show to show performing alongside his music group – Da Psychophats. After some time, the group members went separate ways, leaving the group nonexistent. Basketmouth went ahead to form another music group called “Da Oddz”. The music group was actively performing at shows but never got to limelight as their music brand was not appreciated in the country.
Basketmouth
After being a failed rapper and musician, Basketmouth got lucky in 2001 as he met the man who transformed his career and life – Ali Baba. At this time, Basketmouth was still a student at University of Benin. Following the advice of Ali Baba, he travelled to Lagos on matters of comedy. His first astounding performance would be the one at “Hanging With the Homeboys” which gave him a good start and foundation, earned him a little fame and love from the fans who laughed so hard to his jokes.
He became an active participant in Lagbaja’s motherland concert, and eventually became one of the featured comedians at the popular Nite of a Thousand Laughs. Since then, Basketmouth has won a lot of comedy awards, signed endorsement deals, hosted concerts in Nigeria, featured in movies and performed in different countries. Basketmouth is now a topnotch comedian in Nigeria and is one of the most sought after comedians in Africa.

How Much Does Basketmouth Charge Per Show ?
How much does this hilarious comedian charge when booked to perform at events? Basketmouth earns a lot of money from hosting concerts and also performing at events hosted by other comedians or non comedians. He’s one of the biggest comedians in Nigeria, and is also one of the most endorsed comedians.
This means he’s not paid in bits, rather each show turn up millions to his bank account. Basketmouth charges nothing below N2 million naira per shows in Nigeria. He also performs at events organized in cities in the United States. Where he’s booked to perform outside Nigeria, especially in the United States, Basketmouth is paid over $5,000 dollars.
Well, at a time in the past, Basketmouth, who is currently one of the most successful comedians in Nigeria performed at the dinner party of Engineering students in the University of Benin for the sum of N800 naira. Too poor right? But that was part of the process he had to undergo. Today, he’s followed by over 6 million Nigerians and has fans in other countries. His popularity is extreme.