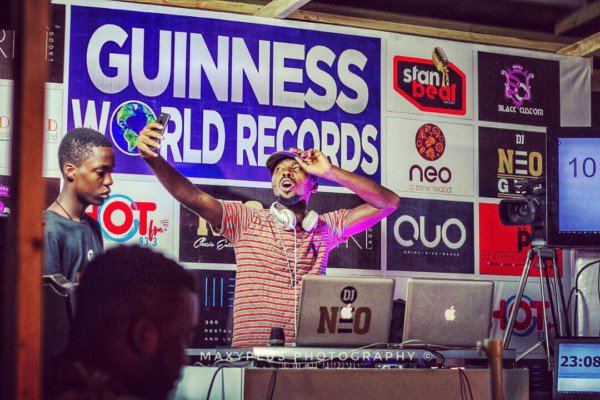 My people, we’re almost there God is great.Thank you for the love & support.Enjoy this video of my 12 Days Of world record marathon Djing so far. It’s Day 13 today Saturday June 30, 2018. 1 more day to set a new World record.Naija to the World

The DJ, who embarked on the mission to eclipse the record set by Polish DJ Norberto Loco in 2011, took it a step further by DJing for 14 straight days (336 hours).
His record-breaking feat, which started on June 17, at 355 Restaurant and Lounge, Victoria Island, Lagos, came to an end on Sunday, July 1, 2018.

After achieving his objective, the disc jockey took to his Instagram page and wrote:
“Dj Neo breaks @guinnessworldrecords longest marathon club djin of 200 hours achieve by Norberto Loco, by an individual. Now about setting new records by Dj for the rest 6days to make it 336 hours… for the culture.”