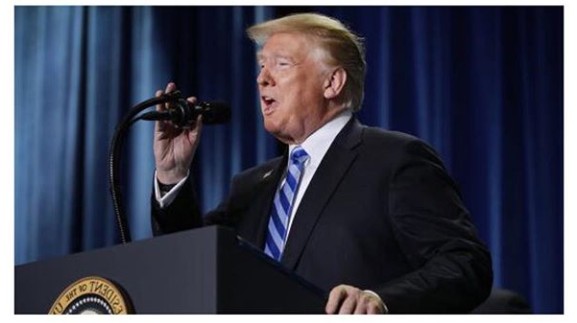 U.S. President Donald Trump said he plans to sign an executive order ending birthright citizenship for babies of non-immigrants and unauthorized immigrants born on U.S. soil, according to excerpts of an interview released Tuesday.

“We’re the only country in the world where a person comes in and has a baby, and the baby is essentially a citizen of the United States,” Trump told “Axios on HBO” in the interview taped on Monday. “It’s ridiculous. And it has to end.”

Trump asserted that it would not take a constitutional amendment to rescind birthright citizenship from some people born in the U.S., a stance that would undoubtedly draw a legal challenge should he proceed.

“It was always told to me that you needed a constitutional amendment. Guess what? You don’t,” he said.

The 14th Amendment to the U.S. Constitution spells out birthplace as an arbiter of citizenship. stating that, “All persons born or naturalized in the United States, and subject to the jurisdiction thereof, are citizens of the United States.”

Trump’s comments mark another escalation in his hard-line stance on immigration ahead of the Nov. 6 midterm elections that will determine control of Congress.

Trump has been trying to restore the public focus on the issue after the events of the past week, which included the arrest of a Trump supporter in connection with mailing at least 13 suspected explosive devices to targets of the president’s ire, including Democratic politicians and the cable network CNN. In another incident, a gunman on Saturday shot and killed 11 people in a Pittsburgh synagogue in what authorities have said was a hate crime.

After an initial call for unity, Trump has increased his rhetoric against the media and undocumented immigrants, including a group of Central American migrants that is heading toward the U.S. through Mexico. The Trump administration announced Monday that it would send about 5,200 troops to the southern border with Mexico by the end of the week to head off the migrants.

Secretary of State Mike Pompeo in September said the U.S. planned to lower the cap on refugee admissions by a third to a record low 30,000 people for the coming fiscal year. Immediately after taking office in January 2017, Trump attempted to ban entrants from several Muslim nations, an effort that was turned down by the courts and forced his administration to rewrite the policy before the U.S. Supreme Court in June upheld the latest iteration.