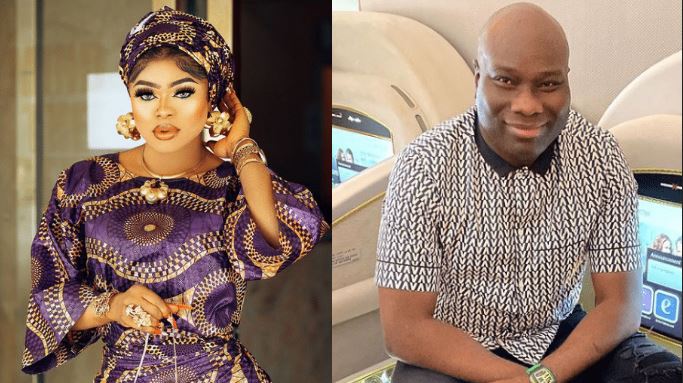 Drama As Mompha Shares Lawsuit Notice Against Bobrisky For Not Denying Claim Of Them Being Intimate, Lying About Borrowing His Cars Among Others, Demands N1bn The rift between Bobrisky and Mompha isn’t ending anytime soon as the Instagram big boy took to Instagram to share a lawsuit notice addressed to the controversial cross-dresser, over libellous claims.

Mompha in the lawsuit notice he shared, accused Bobrisky of not debunking a claim made by his former employee, Oye, about them being homos3xual partners.

He also accused Bobrisky of making false claim of him borrowing his car each time he’s in Nigeria.

Mompha further alleged that the cross-dresser carried out a campaign to smear his name with assertion of him being “an audio billionaire renting cars in Dubai for the gram”.

Asides asking Bobrisky to prove that he rents cars, Mompha demanded for an apology which should be published in two newspapers within 7 days and N1bn as damages over the claims he described as “malicious”.

Mompha also debunked claims of engaging in gossips about actress Anita Joseph. He maintained that he only asked Bobrisky to be careful about her over what she allegedly said when the cross-dresser and actress Nkechi Blessing Sunday had a fight on social media.

He also said that he asked Bobrisky to stop fighting Nkechi Blessing Sunday as it has made people begin to think the fight was about him.

Also alleging that Bobrisky asked him to pay for the meal he ate in his house, Mompha claimed he sent the cross-dresser N1m which he shared on his Instagram page.

I have today through my Solicitors server on the person of Idris Okuneye aka ‘Bobrisky’ a letter of demand for retraction, apology and compensation of One Billion Naira for the libelous and defamatory publications made and or concerning my person. All the allegations made by Bobrisky in the said publications are false and calculated attempt to cast aspersions on my integrity.

I however deem it necessary to clarify some of these allegations in the following terms:

– Regarding the aspect of borrowing Bobrisky’s car while in Lagos. I never borrowed car from him at any point, I only ask him to come with Velar cos that the only Good Car he has as of March 21 2020 what an insult. Me mompha Borrow when i have my own car in Lagos

– I never gossiped about Anita Joseph with Bobrisky, I only told him to be careful due to what i heard Anita Joseph said about me when bobrisky and nkechi were having issues on social media. Bobrisky tried to ask me what happened and I refused to tell him and this was clearly stated in the chat.

– Concerning Nkechi Blessing, I only admonish Bobrisky to stop fighting with her as people were beginning to think it was about me.

– Bobrisky invited me to his home to eat and after some days he demanded I pay for the meal I ate and I sent him 1 million naira immediately and Bobrisky posted it on his page.

– I never gossiped about anyone with Bobrisky, if he has proof of any such gossips, he should post it and stop unsending some of our chats.

I urge my fans, lovers and teeming followers to disregard all the falsehood been spread against my person by Bobrisky as further actions are being taken by my legal team to ensure Bobrisky faces the full wrath of the law. 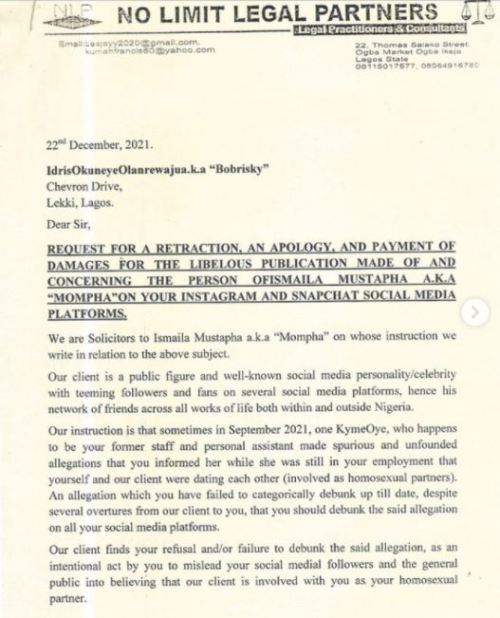 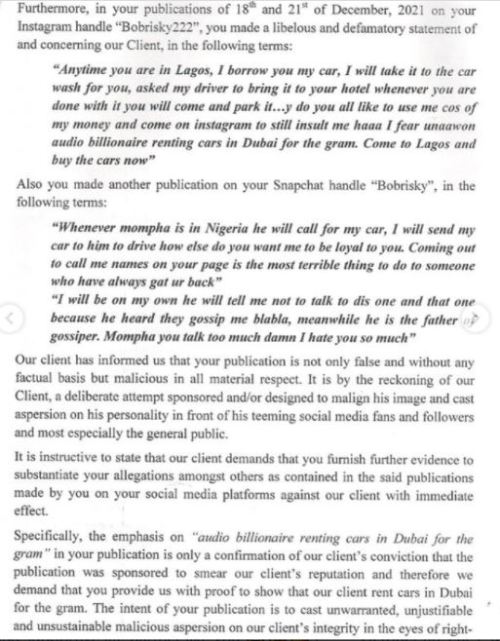 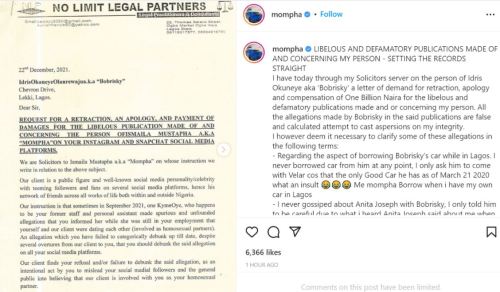