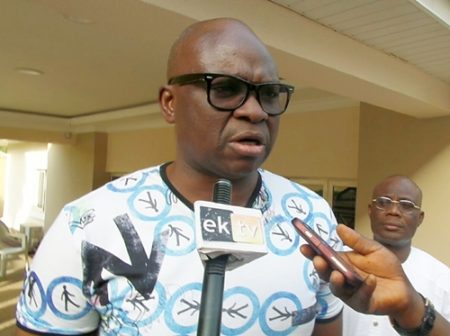 THE Peoples Democratic Party (PDP) South West zone, on Tuesday, condemned the continued detention of the immediate past governor of Ekiti State, Ayodele Fayose, by the Economic and Financial Crimes Commission (EFCC) despite submitting himself voluntarily to the agency.

This was contained in a statement issued and signed by the Zonal Publicity Director of the party, Mr Ayo Fadaka, who said there should not be any need for the anti-graft agency to detain as they claimed they have concluded all investigations on the former governor.

According to Fadaka, the development confirmed that the agency is being used as a tool to harass perceived political opponents and not in operation to defend the public interest, calling on the EFCC to arraign Fayose in court.

The PDP said in the statement: “Our concern is dictated by the fact that months ago, EFCC claimed that it has concluded its investigations and was merely waiting for Fayose to end his tenure and drop his immunity so that he could be arraigned.

“It is now going to 48 hours that he submitted to the agency and he is still being held incommunicado, this development immediately put a lie to the claim that EFCC is actually working in public interest but merely playing a partisan card as attested to by its unfortunate tweet in the immediate aftermath of the Ekiti election.

“We, therefore, hold firmly that if Fayose is not charged to court immediately to answer to whatever charges against him, then it will be very clear that the Buhari administration is merely using the EFCC to intimidate, harass and punish him in the most unjust manner.”

The statement read further that Fayose’s case would, “Add to the long list of such petty vendetta that has been initiated, prosecuted and sustained by this same administration against some Nigerians that are not in the good books of the President, this clearly is an abuse of power which ordinarily should be beneath the scope of a busy President.”

The party noted that the present Federal government that had failed to attend to the security of lives and the economy among other challenges could have the time to pursue vendata against its perceived opponents.

“It is sad that at a time Nigerians are wallowing in abject penury, when institutions are failing and insecurity is thriving that this Buhari administration still have enough time to pursue a vendetta against citizens.

“In this regard, we easily recall Buhari’s “technical victory” over Boko Haram, yet it remains potent enough kidnap our women and girls, decimate our communities and wage war on the nation.

“Just yesterday another aid worker, Hauwa was executed by Boko Haram and all President Buhari could do is place an impotent phone call to her family.

“This Government must begin to take its responsibilities serious by taking actions that will safeguard the lives, properties and economic wellbeing of the nation and not continue to reduce itself to a bully,” the statement said.