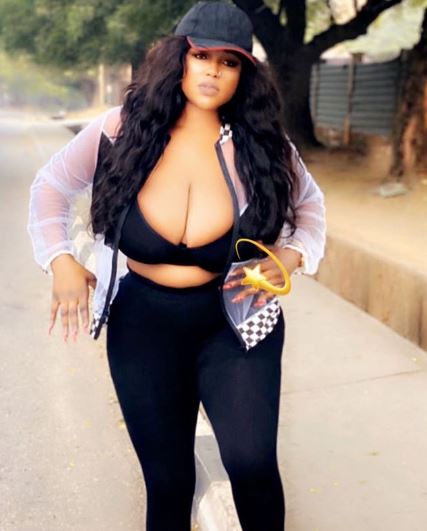 The actress has been asked several times about when she would tie the knot and she’s getting tired of it.

Ghanaian actress, Ella Mensah, is one woman that is naturally endowed. She makes other ladies green with envy and men salivate at the sight of her luscious body. She knows she’s endowed and she’s never shy to flaunt it. While some women with similarly big boobs have gone under the surgeon’s knife, Mensah has said she will never consider that line of action.

In a chat with Sunday Scoop, she said, “Yes, I will consider cosmetic surgery along the way but not to reduce my boobs. My boobs were given to me by God for a reason, so why would I reduce them? There are so many women paying a lot of money to get what God has given to me for free. I will never reduce my natural God-given boobs.”

And though it has been said in some quarters that Ghanaian celebrities feel inferior to their Nigerian counterparts, the actress said it was a ‘big, fat lie’. “Firstly, I’ve never heard anyone say we (Ghanaian celebrities) feel inferior to our Nigerian colleagues. Secondly, it is a big fat lie. We can never feel inferior to our Nigerian colleagues. Ghanaian culture is different from that of Nigeria. Ghanaians are calm, we take our time to do things,we are content with our lifestyles. On the other hand, Nigerians are loud, always in a hurry and on the move to the next thing. We are different though we have some similarities,” she said.

On clout chasing in the entertainment industry generally, the actress said, “Clout chasing among my colleagues is getting too much and irritating. Social media has got many of my colleagues acting stupid and doing anything for attention–just to ‘trend’ on the Internet. It’s really embarrassing. Some of them are so desperate for people to like them that they fake happiness and a certain lifestyle so that they would be noticed. I think it’s a shame and sad at the same time.”

The actress has been asked several times about when she would tie the knot and she’s getting tired of it. She said, “Marriage is not something anyone plans. It happens when it’s supposed to happen. When that time comes, I will say ‘Yes’ (to my man). Until then, I’m happy with my life and I’m enjoying it to the fullest.”