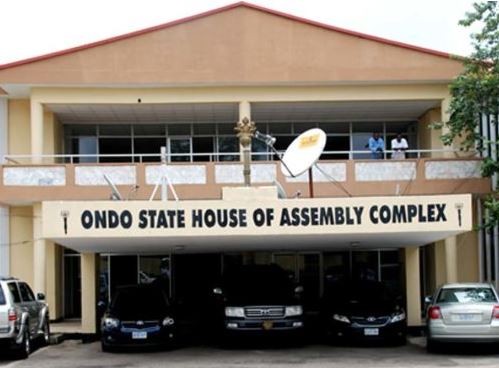 24-hours after, Ondo State House of Assembly reverses Impeachment of its Deputy Speaker

Barely 24-hours after, the Ondo State House of Assembly has reversed the impeachment of the Deputy Speaker, Iroju Ogundeji.

Ogundeji was impeached on Tuesday during plenary and replaced with Bimbo Fajolu. The reversal of the impeachment was moved in a motion by the Majority Leader, Hon. Gbenga Araoyinbo and seconded by Hon. Fatai Olotu from Akoko North East Constituency.

According to the legislators, the reversal was as a result of the intervention of well-meaning Nigerians including leadership of APC in the state, Governor Oluwarotimi Akeredolu and Ogun state governor, Ibikunle Amosun amongst others.

Hon. Ogundeji was impeached by his colleagues for being at loggerheads with the Speaker, Rt. Hon. Bamidele Oleyeloogun. He was among the 18 lawmakers who defected to the ruling party from the Peoples Democratic Party (PDP) shortly after Governor Rotimi Akeredolu became governor in February 2017.
Fajolu’s nomination, on the other hand, was moved by Hon. Isreal Olajide, and was seconded by erstwhile Speaker, Hon. Jumoke Akindele.  He was immediately sworn in by the Speaker, Bamidele Oleyeloogun. Fajolu represents Ile-Oluji/Okeigbo constituency in the Ondo State House of Assembly.