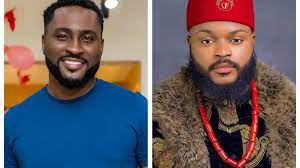 “Pere Does Not Hate Me, We Will Be ‘Bestfriends’ Outside the House” – Whitemoney (Video)

Big Brother Naija season 6 housemate, Whitemoney has revealed that he will share a close bond with Pere when they leave the BBNaija house.

Recall that Whitemoney and Pere have at different times been at loggerheads in the house.

They once had a big fight in which the housemates accused Pere of trying to bully Whitemoney and most recent, Pere, WhiteMoney and Queen fought over a pillow.

However, Whitemoney in a recent conversation with Queen while speaking about his relationship with Pere, noted that he’s convinced that Pere doesn’t hate him and he’s sure their relationship will get better once they leave the house.

According to him, he knows that Pere might not like some of his characters in the house but that doesn’t mean he hates him.

“Let me shock you guys Pere does not hate me, he might dislike some characters of mine which is normal…But everyone has a personality his personality comes with ego. Me and Pere after this house we will be like 5 & 6”, Whitemoney told Queen.