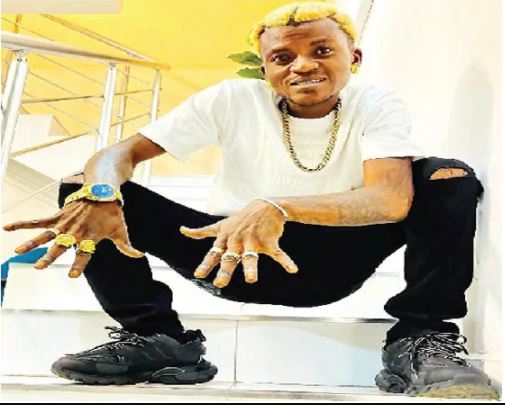 The Nigerian Singer Trapped In An Unending Web Of Controversies

All of sudden and out of nowhere, a remix of the song, Zazoo Zeh, by fast rising musician, Habeeb Okikiola, aka Portable, featuring prolific rapper, Olamide, and dancer, Poco Lee, became a regular street anthem across Nigeria.

The banging single loved by street music enthusiasts did so well that it earned Portable several opportunities to grace mammoth stages alongside top notch artistes during the festive periods.

At parties, corporate functions, bars, clubs and lounges, beach parties, among other spheres of music interests, the enigmatic single by the energetic artist has continued to thrill music lovers.

However, despite enjoying overwhelming accolades in the entertainment industry, Portable’s stint at fame had been reeled by a series of controversies ranging from allegations of betrayal, sexist remarks and sexual assaults, among other attributes capable of threatening his career progression.

The latest case involving the fast-rising artist and his crew happened in Nairobi, Kenya.

A Kenyan radio presenter, Maureen Imbai, popularly known as Black Cinderella, called them out for allegedly sexually assaulting some ladies in Nairobi.

Portable and his team were said to have demanded that the girls should sleep over at their place but the victims refused and the crew allegedly harassed and accused the ladies of stealing the singer’s valuables.

“Drama in Nairobi. The ladies claim the sexual harassment started in the car they were picked in when he attempted to grope her disrespectfully. She didn’t agree to it and they were threatened. Portable assaulted her physically while in the house,” the post read in parts.

In another development in the Ota area of Ogun State, Portable was seen in a trending video clip, engaging in a street fight.

Attempts were made by his security guards to take him away from the scene of the incident but he furiously resisted them.

Portable was later taken away but the windscreen of the Range Rover SUV a fan gifted him was damaged.

Issues bordering on monetary disagreements, ownership claim of gifts from fans, among others reportedly culminated in the collapse of his relationship with Kogbagidi.

The singer who wielded a baseball bat in another trending video clip, could be heard at the top of his voice asking Kogbagidi to return his Range Rover SUV.

Reacting on Instagram, Kogbagidi in a cryptic message that signaled he had parted ways with Portable, said he was not ready to wrestle with a pig.

“You don’t wrestle with a pig in the mud. You both get dirty but the pig likes it,” the post read in part.

However, the most sensational of Portable’s controversial actions started with him calling out Iwe Pascal, aka Poco Lee, for collecting his money and claiming ownership of the ‘Zazoo Zeh’ song.

Following Portable’s social media outburst, Kogbagidi condemned the action and disassociated himself from the fast-rising artist.

Amid appeal for reconciliation from fans and rapper, Olamide, the disagreement, which trended across social media platforms, was settled.

Portable publicly apologized to Poco Lee, Kogbagidi and Olamide for his action.

“Now I know I’m not on this journey alone. Love you guys. I will never let you down again. Expect more from your boy. Zeh nation,” his apologetic post read in part.

But his controversial behaviors had prompted high profile music managers, musicians and fans to suggest that a good manager that would set him on the right trajectory was needed to enable him to propel beyond projected expectations in the music industry.