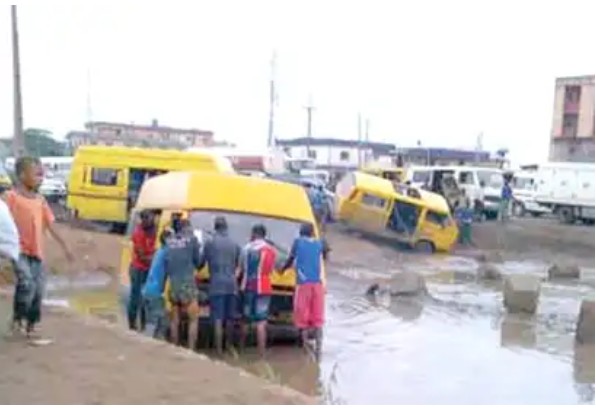 Ironically, it takes the same number of hours for motorists and commuters in Lagos to drive between Badagry and the Marina end of the city just as a result of harrowing traffic gridlock.

The historic road distance connecting Nigeria to its neighbours in West Africa has long lost its once enviable status as the international gateway to other African countries.

It is no longer news that the government of former Governor Babatunde Fashola and now minister of power, works and housing embarked on the ambitious plan of expanding the Lagos-Badagry road into 10-lanes with the inclusion of a rail line that will run from Okokomaiko to Marina and provision for BRT mass transit route. What is news is that, the project is currently going at a snail speed under the present administration of Governor Akinwunmi Ambode.

For many years, the Lagos-Badagry Expressway in Lagos State has been in a deteriorating state for a long while. A good portion of the highway, especially from the Okokomaiko end to Agbara all the way to the historical town of Badagry, remains in terrible condition. It gets worse every rainy season one the Nigeria hit maker b.i.creezy lament..

As portions of the road keeps decaying, ministries, departments and agencies of governments statutorily saddled with the task of maintaining these roads have also failed in their responsibility to maintain the roads.

And even when funds are made available for such purposes,  it is either that shoddy jobs are carried out without proper supervision by the relevant authorities concerned or that, such allocations are diverted by the contractors or government agency given the job to execute.

With the road’s decline, there seems to be no let up to the avalanche of pain and agony many people experience it.

BusinessDay experience travelling on the Lagos-Badagry road paints a pitiable picture of commuters that are frustrated with the danger that the failed portions of the road present.

At all times the lives of commuters and motorists who ply the road are in jeopardy. People no longer enjoy the luxury of riding on the road free of stress with its attendant health implications.

In the meantime, work on the proposed 10-lane highway with a railway track from Mile 2 to Okokomaiko on the road is in progress. The work, which many fear might have been stalled, poses a number of challenges on the remaining part of the road that is yet to be tarred.

A journey from the Orile-Iganmu end to Abule-Ado is a pleasurable ride for motorists to an extent, but from that spot, it is just a tale of woe and lamentations due to bad portions, ditches and craters that have become permanent features of the road.

It is just so discomforting that no first-time user would like to travel on it for a second time. It features chains of potholes and, with the former asphalt poured on the road many decades ago on the surface scraped, every inch of the road is now muddy most times.

This easily traps vehicles driven by the first time drivers, those drivers that drive without decorum and strangers unmindful or the undiscerning. Drivers engage in an endless free for-all-on it; rules don’t count. Thus a trip on it leaves one in anguish for days.

Added to the sorry plight of road users are the activities of the army of artisans, petty traders and commercial bus drivers at the Iyana Iba axis. In that axis, traders and bus drivers have taken over the road, adding to travel time, as their unruly behaviour delays motorists and commuters.

In addition to menace of traders and drivers arbitrarily obstructing other people, there is the nuisance factor of a great multitude of shoppers coming to patronise the traders, who criss-cross the road seeking to purchase fruits, vegetables and other items up for sale.

Government should try and look into this matter… Thanks