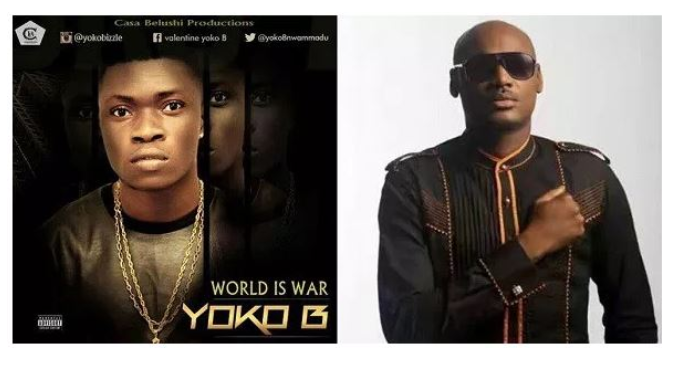 Music legend, 2face Idibia has reportedly been accused by an upcoming singer, Analike Okezie (Yoko B) of stealing his latest hit song, Amaka

The ace singer recently released a song titled, Amaka and on the track, he sang about a certain Amaka who disappointed him after promising him that she would come to his house.

Featuring DMW’s Peruzzi on the song, 2face sang of how he had made arrangements such as buying diesel and alcohol, only for the girl not to turn up.

Meanwhile, in Yoko B’s version, the singer also sang about how Amaka broke his heart after she claimed to love him, however, the beat of the two songs sound similar.

Whilst speaking to Sunday Scoop over the matter, the aggrieved up and coming singer, Yoko B said;

Right now, I am fed up with some of the top artistes in this country.

Once they are up there, they can never help you grow. They prefer to rip you off and frustrate your hustle.

The new song, Amaka, by 2baba featuring Peruzzi is my concept. The song was produced by Richie, who also did the chorus of the song.

Shortly after producing my song, Richie was employed by Larry Gaga and he left FESTAC Town for Lekki where he worked with 2baba. My songs were still on his computer at that point. I was shocked when I discovered that they had ‘stolen’ the title, concept and message of my song.

I released my version about five months ago and I have been trying to promote it with the little resources I have. I was already negotiating with Avalon Okpe to direct the video when 2baba released his version.

I feel bad that they cheated me because I am an up-and-coming artiste. I want the world to know what has been done to me.”

When quizzed about whether he had made his grievances known to Richie personally, Yoko B said:

Yes, I complained to him but he didn’t say anything reasonable. He said anybody can come up with the title, Amaka. But I wonder why the concept and instrumental of the songs are so similar if something isn’t fishy.

I am sure that somehow, 2baba must have heard the song. To cover their tracks, 2baba’s version was produced by another producer, Sperochbeatz, but they all work in the same studio.”

However, when Richie was contacted, a person who claimed to be his manager answered the call and threatened their correspondent not to publish the story.

The guy (Yoko B) is just looking for cheap fame. I am Richie’s manager and I know about the whole story. We really don’t have anything to say concerning the matter.

He should go anywhere in the world concerning the issue. For your own good, I would advise you not to publish the story. I don’t know if Yoko B has the power to finish what he has started.”

Meanwhile, 2face’s manager,Efe Omoregbe,stated that he was unaware of the allegation.
He said:

This is the first time I’m hearing about that claim and I cannot comment on what I don’t know about.”