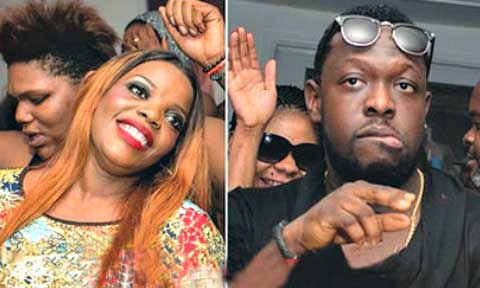 Why I Broke Up With Actress, Empress Njamah – Timaya Exposed

Recall that the Bayelsa State-born musician Timaya and the actress Empress Njamah had dated during the early stage of his music career, but all ended in an unpalatable way.
Revealing details of how the relationship ended during a chat with popular On-Air personality, Daddy Freeze, Timaya revealed she accused him of cheating with different girls.

He said, “We woke up one day, and she said I was cheating on her with different girls, and I asked her with who, she called quite a number of names, popular people that I didn’t think of and I didn’t do shit with.

‘’There was one other popular actress that comes to my house regularly, at some point, we had a misunderstanding and we broke up and I even heard about the part where they said I went to the church to beg her.”

Timaya also stated that he gave Njamah a car when their relationship was about ending.

According to him, he pleaded with her to reconcile their differences and she brought up her concerns over the fact that the car he had given her was a gift from another woman.

“At that point, she wanted me to get her a Murano, and at that point, a friend of mine came home for Christmas and brought a Murano, and he was going back and wanted me to buy the car, so I was like ”you like this one” she was like she doesn’t like this one that she wanted a particular one from the United States. So I gave my friend the money to buy the car. Then a girl got me a Honda Pilot for my birthday, just a fan.

‘’The lady who gave the car gift wanted it back because I had given it to Empress. I reached out to Empress to get the car back so as to return it back to the lady.

‘’Empress told me she has used the car to settle herself. I was looking for her, that’s why I went to the church.

‘’I’m saying this now because of the comments people made when they say “you buy the gift, you go collect am like Timaya,” am sorry that was my car.

“I went to the church because it is my car. I had the spare key, I wanted to drive the car, so the security guys come dey look me, and I tell them say, but that’s my car, na my girl, Empress na him carry this car come to this church, so they said I should go inside the church and call her and I said I can’t go inside when there is a service going on, so na from there the chaos happen,” he said.