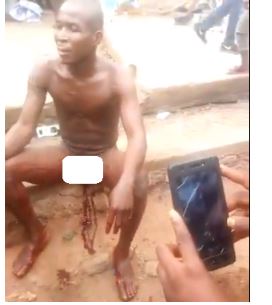 A very disturbing video shows a man bleeding after his penis was cut off by a husband who caught him having sex with his wife.

According to online reports, the wounded man was having sex with his lover in her matrimonial home. The husband walked in on the disrespectful scene and instantly got revenge by cutting off the man’s male member.

In the video shared online, the man is seen sitting, possibly in shock, as onlookers took photos of what’s left of his bleeding penis.

Watch the video below ;

Man caught another man sleeping with his wife in his house and cuts off his penis. Live witness says the man swore he’ll cook and eat the penis.
Viewers discretion is advised 🙆 pic.twitter.com/KmQAuU7MnV